The first art work is for all those ladies bloggers ( Ronnie, Jan, Cat, Hermione,  Bonnie, ...) who have blogs to celebrate their love of being spanked. However, there must be women still seeking a partner. 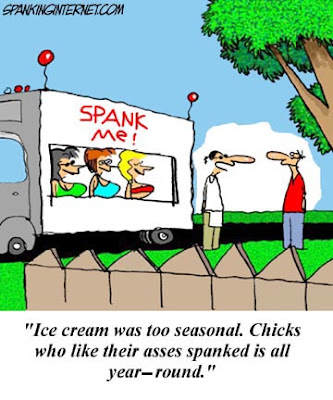 Even though they might like to be spanked, they may not actually ask to be spanked during any given week. Here is the solution 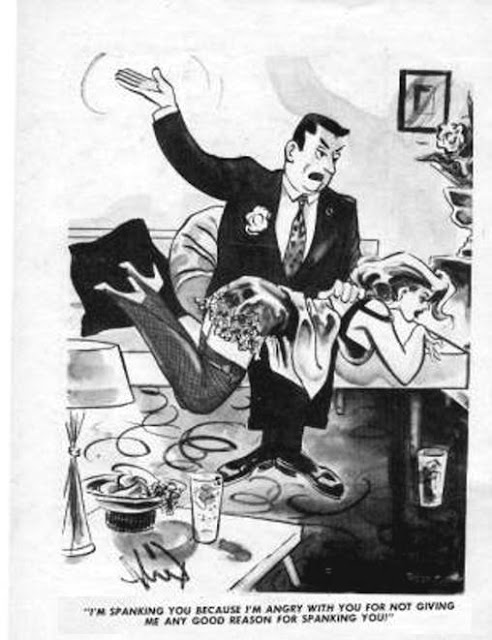 Now, if they ever want to try taking a hands on approach of their own, simply to "test the waters" 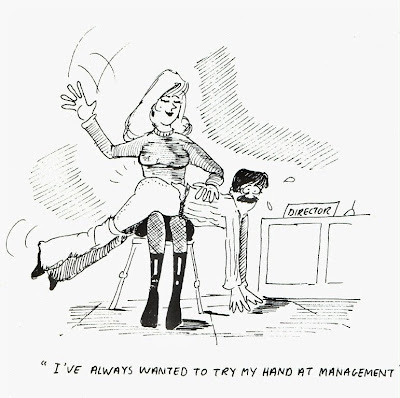 However, remember the motto: Safe, Sane, Consensual!
Guess the gender of our candies of the day. Ever wonder that SM reversed is MS! Sometimes, the fickle finger of Fate should determine your spanking..

These were made by Miss Eve Harper now called Mistress Sidonia Bork some years ago. The 5 dice covered
1. Implement
2. Number of strokes
3. Position
4. A gamble dice; let off, double etc
5. An afters dice

If anyone knows what the implements are on the dice,do let everyone know.

I also wonder what the AFTERS dice is... how many more spanks afterwards??
and keep smiling

and one for Hermione

There exist many male submissive sites, so here are a few for your pleasure..

The following site has no explanation, but the title does say it all
http://her-word-is-law.tumblr.com

The above words are very true

http://needherdiscipline.tumblr.com
A site with lots of videos, of men being spanked by women

the title is What naughty boys get....

http://serpent13.tumblr.com/
THE AUTHOR WRITES: This is my Fiancé whom I have decided to spank and discipline regularly, to prepare him for a long happy marriage to me. I will make him a better man and regularly remind him that his bum belongs to me to do with as I please .
This site has  a multitude of gifs, and videos, of one woman spanking her boyfriend, and answering questions from readers.


http://ladiesspank.tumblr.com
The title states it all

Enjoy your fantasies, and even better, enjoy the reality of your spanking relationship
bottoms up
Red
Posted by Red 4 comments:

Many tumblrs and websites show large breasted women, so I thought I should take some time praising women with smaller breasts.

A positive is that many men's magazines with class show women with small breasts.
Women  of all sizes and shapes are beautiful.


http://tinyttlover.tumblr.com
One REASON I LOVE NUDIST BEACHES IS THAT EVERYONE IS NATURAL. MEN AND WOMEN COME IN ALL SIZES AND SHAPES.

THE ABSOLUTELY WORST THING, TO MY WAY OF THINKING, IS WOMEN WHO AUGMENT THEIR BREASTS WITH IMPLANTS, THINKING THAT THIS MAKES THEM SEXIER AND MORE DESIRABLE. IT DOESN'T, EXCEPT FOR VERY SHALLOW MEN.

MY reason for posting this was having fun admiring women, and stressing that petite is also beautiful.

http://flat-chest-skinny-girls-2.tumblr.com
I do however wish the males who makes these tumblrs found better names that are more flattering.

Outdoors, naked, women should be proud of themselves!

i guess I should be rewarded for my efforts with this post.

and she was watching, with a satisfied smirk

A smile for today

Life should be enjoyed, not endured....
Thought for the day

and with that delicious dinner

and if Cindy read the above, she should also always remember to look at this eyechart...

Ya THINK: Maybe there is some truth in this comment

Now this is funny, if you read the caption...

For all you northerners (at least in Alaska)

I can just see Baxter, and myself, and many others wanting to work at this office

As you may have guessed, the day after Cindy had been spanked, I was quite significantly spanked. I am in no way complaining, as I wish Cindy would spank me more often, for a happier marriage.

I know that at times (often), I can be quite dominant in my opinions as what we should be doing, and many features of life. This issues are easily controlled by a spanking. 'I also have a tendency when stressed to raise my voice, and this can be controlled by Cindy, simply with a upraised eyebrow, or by simply stating "notch"

The scenario was my having to retrieve Ms. Hurley, a bath brush, and Cindy's favorite heart shaped metal studded paddle.

Cindy started by having me stand in the corner for ten minutes, with my pants around my ankles. This does increase your awareness, being partially undressed, and simply wearing panties.

Cindy, eventually, (or that is what it feels like standing there), came in to the bedroom, and called me over for my spanking.  she patted her lap, and i lowered my panties and bared, bent over her lap.

Cindy started with Ms. Hurley, with a definite delight in her voice, of how Danielle would be happy at her using this. Ms. Hurley descended with strength, slowly spanking one cheek, then on to the other, and back again. Every spank was really felt and my feet and legs were dancing, and I was owwing from the first few spanks. Many spanks late, cindy stopped to inform me as to reason for my spanking.

Ouch!!!! If the lecture was only starting, Cindy was still holding the first implement. After the lecture, the spanking re-commenced.

After a little while, Cindy then paused and switched to the leather paddle, which she used with vigor. It was as though she had just started, enthusiastic and wanting to get a reaction, which that implement certainly achieves. the way it nudges between the cheeks.

Cindy eventually stopped, stating that my face was very red, as the head down towards the floor was causing this redness.

Spanking finished? Absolutely NOT. Cindy stated lets move to the bed, and promptly sat on the bed, beckoning me over her knee, prone on the bed.

Cindy now stated it was time for the bath brush, and WOW!!! I think this was the hardest spanks of the trio. i was owwing and feet dancing, and i believe a few tears formed in my eyes.

Cindy delighted in using this rapidly with strength for a couple of minutes.

This is the strongest Cindy has ever spanked me, and it was effective. Payback is a bitch some might say, if you have read how I spanked Cindy the day before.
I now know  what people mean when they say that their bottom feels like it has been stung by bees, as it was a constant prickly stinging pins and needles feeling for the remainder of the day.

I thanked Cindy for the spanking, and shortly thereafter the loving making was out of this world. ..

The next morning, my bottom was still quite pink, and after my shower, extremely red.

A photo tells the story better than a thousand words.