If you want to read of one couples method, you should use the link to this site.


https://domesticdiscipline.info/
This is their intro:


The stories are true as are the spankings. Consensual spanking for us means that my husband has asked to be held accountable for his actions and misdeeds and has consented to receiving actual punishment spankings accordingly. There are no warm up swats, no rubbing his butt or long pauses between swats during the spanking. It is a rough experience for him and I commend him on being man enough to take what I dish out. Because let me tell you…it is oftentimes very harsh.
Even though the spankings I give him are very real and very painful (even to the point of tears), he has told me on many occasions that he appreciates me holding him accountable in this way. He has told me that he feels no resentment for the spanking as it was earned and that he feels a sense of calm and balance afterwards. Side note: After a spanking…he is a model citizen around here! Very eager to please, in a great mood and very productive.
Contrary to what some might think, we love each other very much and respect each other. There is no corner time, or belittling or degrading him. That’s not what we’re about. We are just a married couple who have evolved into this spanking agreement and over the years have realized that it is a very effective way to enforce rules and transgressions around our home. At the same time, it significantly reduces the amount of tension between us. For example, has your husband ever done something repeatedly that gets on your last freaking nerve? I think we’ve all heard the infamous “leaves the toilet seat up” complaint. You nag him about it, and even though he is probably not trying to intentionally piss you off by leaving it up, he just doesn’t think about it when he’s going to the bathroom. Why? Because there is no consequence for him in that situation. And so you continue nagging (bitching) and he continues to get annoyed, roll his eyes, laugh about it with his friends, etc. Well, I assure you…if he got a REAL spanking every time he left the seat up, his butt would start talking to his brain pretty quickly and he’d start remembering to put the seat back down after he is done. No nagging, no yelling, no annoyance, no tension between the two of you.
Rule was broken, it was addressed (real consequence), and a new and improved habit was formed, thus eliminating this tension point from here on out. And even if he were to forget a month or two down the road, I find that I don’t get annoyed because I’m in a position of power and know exactly what I’m going to do to address it and eliminate it. I have a recent blog post about this type of thing called “Breaking His Bad Habits“.
This lifestyle has worked very well for us. On all other accounts, we’re very normal people. In fact, none of our family and friends know or suspect anything about “this thing of ours”. And, we’re often told that we’re one of the happiest, most in-love couples they know.
At any rate, there is more on the About Us page, so check it out along with our previous and forthcoming blog posts.

Thanks for reading!
Love and Lashes, 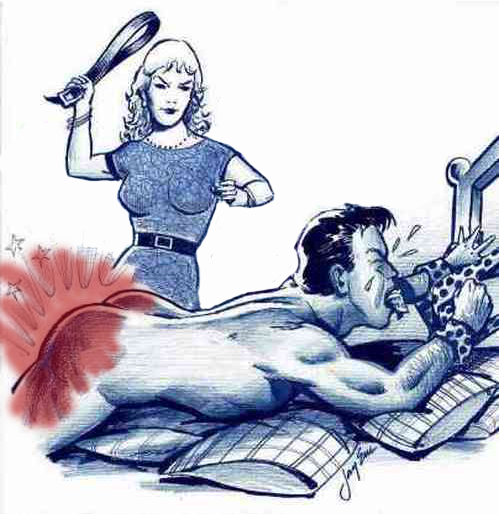 You're on a nice roll with those Trump memes!

Dana nd Baxter: sadly, there are so many of them, and now, covid 19 is simply out of control, because of that lunatic
bottoms up
Red